I remember when I found out. News has been a part of my life since I was a little kid, and I learned at an early age the more sources for news the better informed a person could be. But this was a tsunami of photos, videos, of people talking about what had happened, and the horror grew with each passing moment. Gunmen had entered a school in Colorado and began shooting. There were bodies. There would be a death toll. There was even a music video of the crime, with Sarah McLaughlin’s “I will remember you,” playing as background to students jumping out of windows and running for their lives.

When I sat down to write this, I turned to what I knew, what I know, and it was my impulse to recite to you the news; the number of shootings since that day, this day, in 1999. I had the statistics and the numbers. But thus far, those numbers haven’t made one ounce of difference to anyone, anywhere. I realized they wouldn’t here, now, with you. 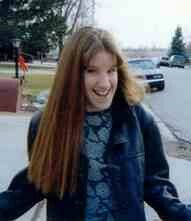 Kelly was a shy girl from Arizona, whose family had recently moved to Colorado. Her parents looked for a school, a neighborhood, a small town, where their daughters would be safe. Creative and intelligent, Kelly began to write her autobiography, because she planned to have adventures in life worth writing about. She also wrote very dark stories, but the stories usually had happy endings. At age sixteen, she hoped one day to have a Mustang or maybe a Corvette, a fast car, to make the trip back to see her best friend in Arizona at a good speed.

But writing was Kelly’s real passion. Poems and short stories were what Kelly loved to create, and she wanted to be published.

Kelly was hiding under a table when the murderers came in and started shooting. At age sixteen, Kelly was shot in the back, in the library, and she crawled into the hallway before she died.

Twenty years later, Kelly Fleming would now be thirty-six. Maybe a mom, certainly a writer, maybe a teacher, but no. Think about this for a moment; how many more writers, artists, moms, dads, brothers, sisters, sons, daughters, firemen, policemen, soldiers, musicians, and all around average and decent people, have we lost? How many survivors will carry permanent damage, scars, physically and emotionally, that will stunt their lives forever? How many children will live with fear and guilt for the rest of their lives, having survived watching people they loved gunned down in the halls of our schools?

Pick one. Choose a child that has been murdered and do some research. Read what her parents said after she was put in a body bag on national television. Read what her siblings said about her life. Listen to her friends speak of someone they haven’t let go of yet and maybe they never will because I certainly cannot.

We haven’t done anything to protect our kids since 1999.

It’s been twenty years, when are we going to start?

Mike writes regularly at his site:  The Hickory Head Hermit. Opinions expressed in this article are not necessarily those of the management of this site.