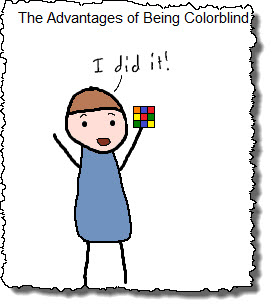 Explains Gilmore, specialized light-receptor cells within the retina called cones are responsible for our ability to see color. There are three kinds of receptor cones and each is designed to absorb different wavelengths of the visible light spectrum. Color vision is dependent on the interaction of these three cones, one of which is particularly sensitive to red light, another to green light, and a third to blue light. When one or more of these cones in an individual’s retina is absent or damaged, some kind of color vision impairment will result.

True “blindness” to color—the inability to see any colors but shades of black, gray or white, a condition called called monochromacy—is exceedingly rare, Gilmore notes. More commonly, “People with color-blindness sort light wavelength patterns into fewer separate categories than do those with a larger complement of photoreceptors,” he says. “So, if you have a smaller working complement of photoreceptors than I do, you aren’t ‘blind’ to color, you just see fewer categories than I do and perhaps lump together colors that are distinct to my eye.”

About 99 percent of all colorblindness is a form called anomalous trichromacy, which usually results in problems distinguishing reds and greens, or—less frequently—blues and yellows.

It is a common misconception that people with red/green colorblindness see reds as greens and vice versa. In reality, they see these two colors as very similar. When looking at a color spectrum chart, most colorblind people see variations of yellow, beige, blue and gray instead of the greens, reds, pinks and teals.

There is no treatment for colorblindness, and although for most it’s a minor disability, being colorblind can create some frustrations and even occasional dangers. If you’re a red/green colorblind person, that color-coded Weather Channel map won’t be much help to you. Traffic lights—and more dangerously, single caution lights—won’t look red or green to you. And you probably won’t be very good at picking out ripe tomatoes in the supermarket or telling whether a piece of meat is raw or well done. 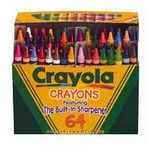 Bonus Fact:
There are few things as colorful as a box of crayons.  Normally, a good person to attest to this fact would be Emerson Moser, who, in 1990, retired as Crayola’s senior crayon molder — with 1.4 billion crayons moulded over 37 years on the job.  But Moser would be of no help: upon his retirement, he announced that he is colorblind.