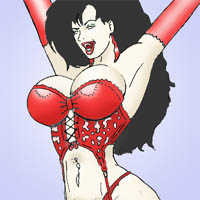 A senior Iranian cleric says women who wear immodest clothing and behave promiscuously are to blame for earthquakes.

Iran is one of the world’s most earthquake-prone countries, and the cleric’s unusual explanation for why the earth shakes follows a prediction by President Mahmoud Ahmadinejad that a quake is certain to hit Tehran and that many of its 12 million inhabitants should relocate.

“Many women who do not dress modestly … lead young men astray, corrupt their chastity and spread adultery in society, which (consequently) increases earthquakes,” Hojatoleslam Kazem Sedighi was quoted as saying by Iranian media. Sedighi is Tehran’s acting Friday prayer leader.

Jen MCreight, the Blog Hag, is proposing a Boobquake to disprove this theory.  In the name of science she’s offering her boobs and is encouraging other women to do the same on Monday, April 26th.  Join the cause!

Here’s a movement I could get behind.

12 thoughts on “Show your boobs in the name of science”